For years and years, I had a boss that I really didn't like very much. Al was funny and capable, but not a good person. Married with two small boys, he would spend every weekend on overnight scuba diving trips or camping at a minor league NASCAR track. Working pit for his friend. He said these trips were reward for being the bread-winner. His wife sat around all week, so she didn't need a break on the weekend like he did. When the inevitable divorce came, Al started buying gold bars. He embezzled as much money from the relationship as he could get away with. His wife deserved nothing. He cringed at the thought of her taking the money that he earned. Al's favorite movie was "Good Morning Vietnam". 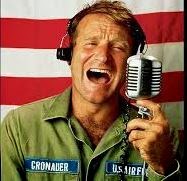 At first blush, Good Morning Vietnam seems like the sort of movie that cheese-balls like Al prefer. The sort of movie that they can quote over beers with their friends. Like Top Gun or Stripes. And it is. GMV is loaded with quotable lines. The sort of jokes that immature men can tell one another when they cannot think of anything witty to say. I have seen GMV a dozen times. I won a copy of the VHS tape on a radio call-in contest in the late eighties, so I have owned it for twenty-five years. Comedy and action, a movie to watch when restless, late at night.

There is a depth and warmth to the movie that transcends the cheese. It paints a human portrait of residents of Vietnam that has nothing to do with war. It shows their life of poverty and striving. It shows humor and hardship. The movie is a roller-coaster. From comedic to heartfelt to tragic and back. And the reason it works is Robin Williams. His character makes each section of the movie believable. His humor is undeniable, but it is the acting that makes him special. His facial expressions tell most of the story. His wonder, his joy, his pain.

It would probably be hard to find an American who couldn't think of a Robin Williams movie she or he loves. The body of work is vast and varied. He was prolific (three movies in post-production right now) and unpredictable. I looked through his filmography on www.imdb.com and I was shocked to see the number of films he starred in. Most of them were unfamiliar to me. But many of them are in my list of favorites. Funny movies that made me think. Thinking movies that made me laugh. Movies about broken people trying to find their way in life. The Fisher King, Dead Poet's Society. Even RV.

My favorite in the list is Good Will Hunting. When it came out, I watched it twice. A movie about a troubled young man wrestling with his demons. But when I watched it a few months ago, the first time in a decade or more, I found it to be about an aging therapist. A man trying to get his life back on track following loss. Clearly, my perception has changed because of my age and my maturity, but there is something else there. Something that is consistent in every Robin Williams movie that appeals to me. While he is completely overbearing on screen, the star of the show, he somehow lets the other actors leave a memorable impression. My most vivid memories of GMV, et al, are not of Williams telling jokes, but of another character's crisis. Every Robin Williams movie I can think of, that I love - where his character grows, adapts, improves - is also about someone else.

I'm sure that my old boss, Al, is throwing out Good Morning Vietnam quotes these days. Me, I'm thinking of Robin's trademark sad-smile. His warm but resigned eyes. The evidence that there is always a bit of pain beneath joy.
Posted by CP Rider at 7:06 AM No comments:

"That's stupid. Coasting is the best part." - My brother, David.

Two disparate quotes, polar opposites. A starting place that indicates common ground will never be reached. That's fine. It isn't an important topic. Doesn't affect society, not worth arguing about. Not like climate change, gay marriage or Lady Gaga. It really only impacts the rider. It is about aesthetics, purity, preference. It is riding “fixed.”

Fixed gear bikes have gained in popularity over the past two decades. Their simplicity is undeniable. Fewer moving parts, less to break down, to maintain. Less to rust. Less to steal. The design is straightforward. The bike has no freewheel. A device invented more than a century ago; it allows the back wheel to spin without moving the pedals. On a fixed gear bike, a fixie, as the hipsters call it, the pedals, the chainring, are essentially chained to the back wheel. If the wheel is spinning, so are the pedals. If the pedals are spinning, so is the wheel. Frontwards or backwards. The pedals and the wheel move as a unit. Pedal hard, the bike goes fast. Stop the pedals, the bike stops. Not much is simpler than that. 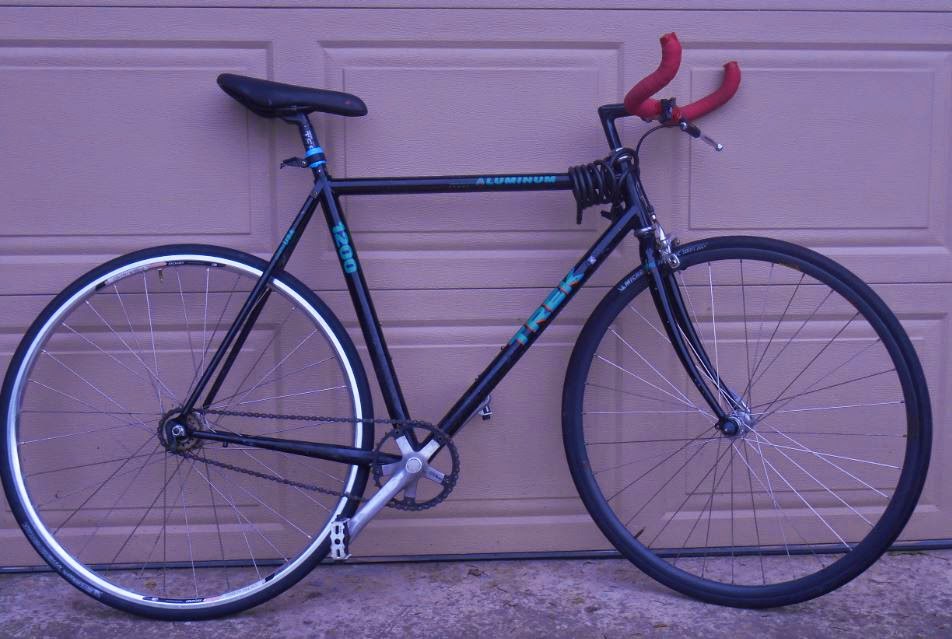 I began riding fixed when my kids finished child care, started grade school. No more drop-offs and pickups on my work commute. It had been eight years since my last stint as a bike commuter. I was itching to resume riding to work. Hell or high-water. Hot enough to fry an egg. Rain, sleet, dead of night. Any other clichéd adverse riding description. Any weather, any time. As early as 4:00 AM, as late as midnight. I didn't want to ride my 'good' bike. I had to park outside. I would ruin it. Or it might get stolen. I had a decades-old Trek 1200 in my attic. Nice frame, light, aluminum. It was all I needed. I stripped off the gears, the derailleur. Ditched one of the two chainrings and all other extraneous parts. Cut my dropbars into bullhorns. 'Flop & Chops' they call them. Shortened the chain. The only money I spent was on a cheap back wheel with a fixed hub. And then I rode it for years. Back and forth to work, all over town. Pretty much rode it until it was worn out, too hard to maintain.

The bicycle isn't as old as many people think. Barely older than the automobile. I once read on a bike-shop website that "for centuries Americans have enjoyed riding bicycles..." Not correct. The first pedal-propelled bike wasn't invented until almost 1860, and the first chain-driven bikes became available in the mid-1880s. But five years later, bikes included pneumatic tires and the familiar diamond design. And there it was. Just 30 years after the first pedal-bike was created, the bicycle was perfected. Materials have changed. Lighter, more durable metals, more pliable rubber for the tires. Improved machine techniques make everything sleeker, stronger. But the basic design was set. And they nailed it from the start. My brand new Specialized Langster is conceptually identical to a bike I could have bought in the late 1890s.

With proper seat-height and alignment, a bicycle is the most efficient means of human transportation. Least calories expended per miles covered. And on this machine, the engine gets stronger the more it is used. I would argue that the bicycle is the most perfect machine ever invented. In the past 125 years, engineers and manufacturers have tried hard to improve on the design. Adjustments made to the geometry. Shocks, disk brakes, and gears, lots of gears. Some of the changes have merit, some are just stupid and don’t last. But in the end, the basic 1890s design will work adequately for many if not most riders.

I have two bikes right now. The Specialized Langster I mentioned earlier and a 2012 Giant Seek. The Seek is marketed as an "urban-influenced sport bike." Sort of a cross between a mountain bike and a road bike. Geometry-wise, it looks and feels more like a mountain bike, but it is road bike through and through. Sort of a bad-ass hybrid. It has 24 gears. I'm not opposed to gears, or even a freewheel. Both are nice on a long hilly ride. But for popping around town, I find them extraneous and in the way. One more thing to worry about. Am I in the right gear? Much more satisfying to just dig in and ride the gear I have. Attack the hills, control the descents, stand dead-still on my pedals at traffic lights. Trackstanding. Like a unicycle, fixies are far easier to keep upright when stopped. Imperceptible rocking, forwards and back. An inch or less. Riding fixed is fun. Aesthetic. Artistic. Human and machine working as a unit. Zen.  No need to switch gears and ride the brakes around every corner.

And for me, that's really what it comes down to. Connecting with the bike. Riding fixed pays homage to the roots of cycling. Recognizing that the bicycle has been perfect for well over a century. I find happiness in fixed-gear riding. It leaves me feeling peaceful. In touch with a bygone era. In touch with my favorite machine. For years I have been striving for simplicity in my life. So when asked why I ride fixed, I forego this long explanation. I usually answer "Why not?"
Posted by CP Rider at 9:37 PM No comments: